The Enslavement of The Sick

In this scary cartoon by Chris Barchard entitled "The Enslavement of The Sick", government policies on mental health are likened to the Nazi Holocaust. We see vast numbers of people labelled "MAD" being herded into the dark interior of a barbed-wire-perimetered concentration camp by guards with uniforms with swastikas. The weapons brandished by the guards are giant syringes labelled "DRUGS" and "WORK", and the sign above the concentration camp entrance says "ARBEIT MACHT FREI!* - WELFARE REFORM - THE MENTAL HEALTH ACT - COMPULSION OUT OF HOSPITAL - DETENTION WITHOUT TRIAL - INCREASED POWERS FOR PSYCHIATRISTS". One of the oppressed people comments "I think they want get rid of us".

(Click on the image or here to see the full-size version in high resolution!) 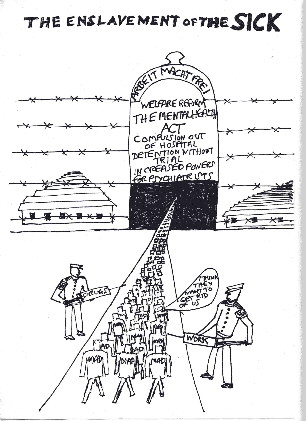 (Click on the image or here to see the full-size version in high resolution!)

* "ARBEIT MACHT FREI" is a slogan which was on entrances to Nazi German concentration camps, and translates as "Work will make you free". The significance with modern times is presumably that the government forcing WORK onto people strikes a chord.