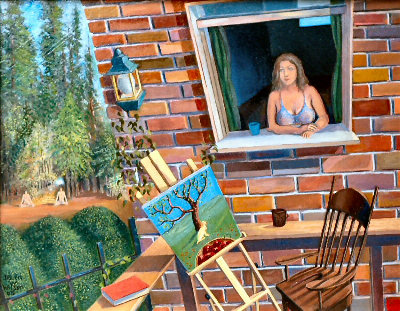 Canadave: I painted this picture intuitively and without malice aforethought in the last few years. I entered it into a competition that was sponsored by Mental Health where I live. Only about 80 people entered. It was the first year of such an enterprise and perhaps many did not know of its existence. Four 'winners' were chosen. I was one. For having won, I received money. (I bought a new digital camera with the dough). The picture itself will go to an especially helpful mental health service worker. This painting has become an 'award'. It is also gone, but for digital images. Because it was rendered "incidentally", it's meaning is not clear to me. If I knew in advance what a painting 'meant' it would quickly succumb to a slavish execution- a monotonous elocution of certain presumption. Like a dance, unrehearsed and unchoreographed, this picture is on its own. I cannot 'justify' it. It is nice to progressively sojourn through a painting, from beginning to "end", not knowing its outcome. All representational images may be regarded as 'emblems of Truth', of Reality, as projected by an artist. Like dreams, they feel how they feel, do what they do, and offer no explanation. Unlike dreams, however, they just keep right on ticking, day and night. One of the three judges has told me that, while on a bi-polar high, this picture sent him still further upward. This statement sanctions my hope that an art work may do just that: feed someone's well-being. See higher resolution version